Simple, fun, yet surprisingly addictive! I guess that is how you can perfectly describe Path of Adventure, a text-based roguelike that is wonderfully optimized for mobile devices. While the popularity of text-based games drastically declined over the years since most gamers are now in favor of visually-stunning video games, we still have dedicated independent developers who gave their full effort to recapture the nostalgic gaming experience. With Path of Adventure, you will be taken into an epic adventure as you explore a mystical world filled with strange and magical creatures. For a full-fledged text-based game, nothing can be more fitting than a fantasy-theme and this is exactly what Path of Adventure has to offer.

For those who are familiar with the classic Dungeons and Dragons tabletop game, Path of Adventure seemingly followed the same formula. It managed to capture all the classic elements that we all enjoyed from the aforementioned game while incorporating some small yet unique approach to its gameplay. In the entire course of this game, the player will be asked to solve a series of dilemmas, engage in numerous battles against creatures and monsters that you will encounter along the way. You will also be asked to explore places like ruins, swamps, dungeons, and gather great treasures.

Unlike most RPGs today, Path of Adventure is certainly not a visual delight. The game will not highlight any graphics or illustrations to represent your character or the settings. It is not even accompanied by any piece of well-fitting music to set the mood. As a text-based game, all you have on your screen are texts and tap-based buttons to interact with. It may not be an ideal game for everyone but for someone who has a creative imagination, Path of Adventure is certainly a great fit. If you are up for an epic magical journey, feel free to explore this unique RPG and see how far you can go. 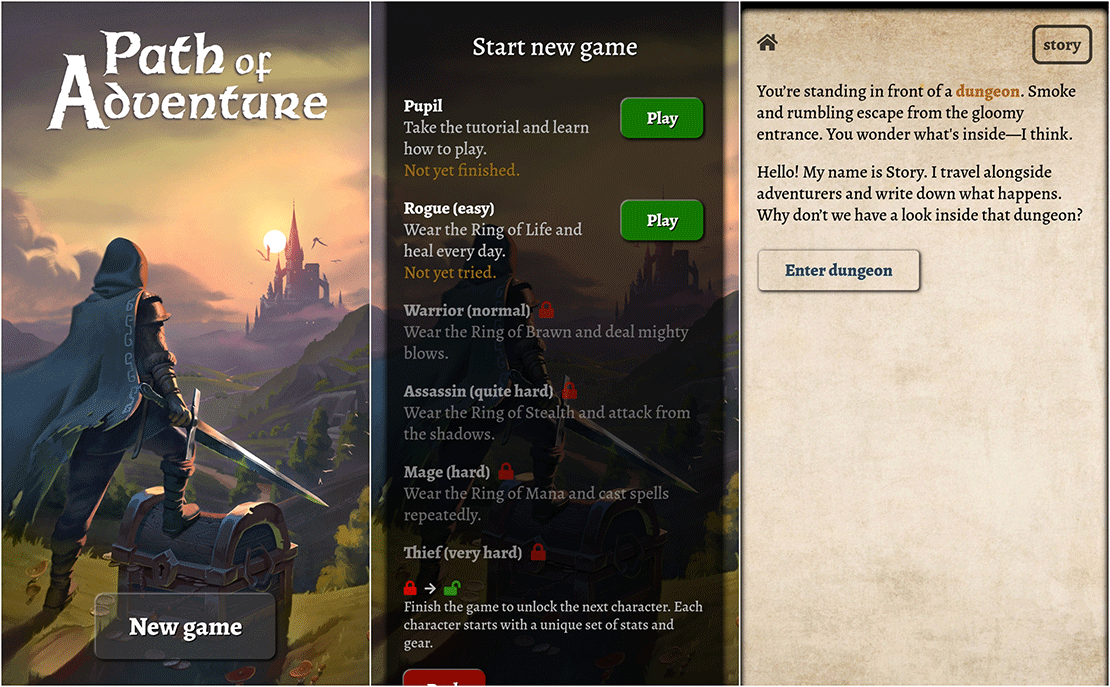 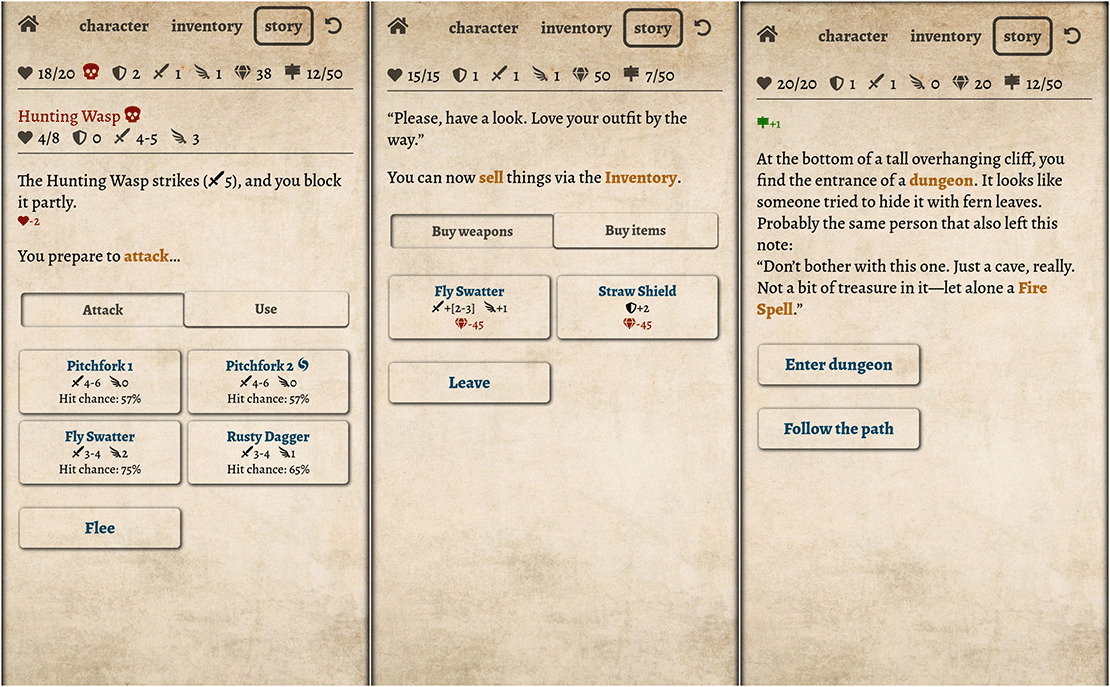 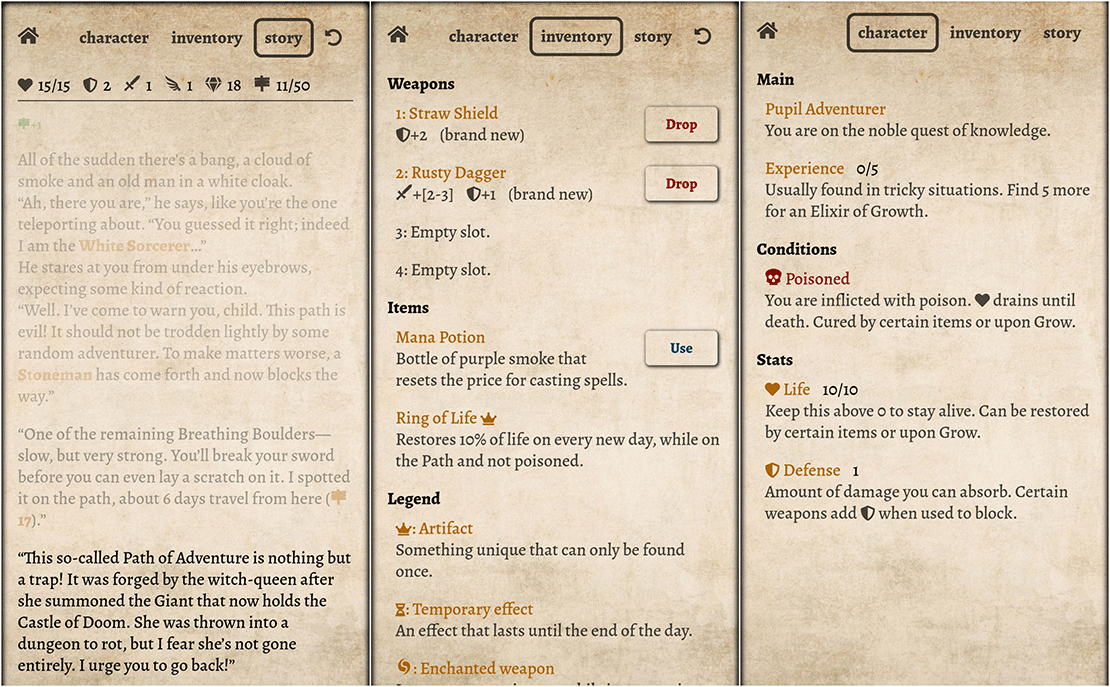 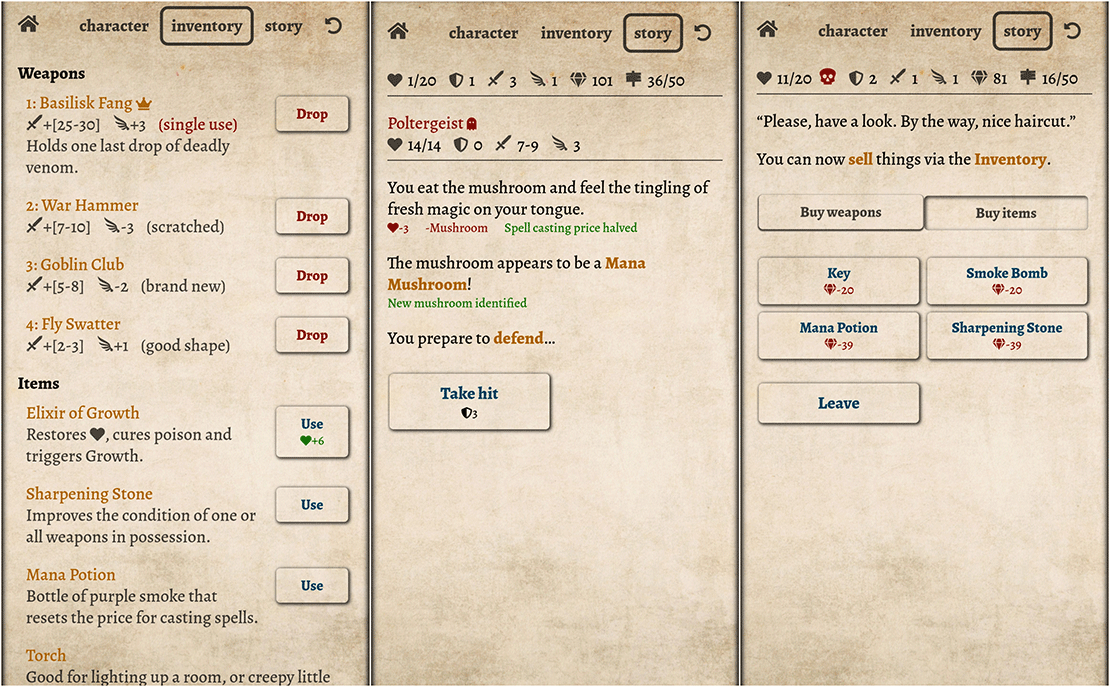 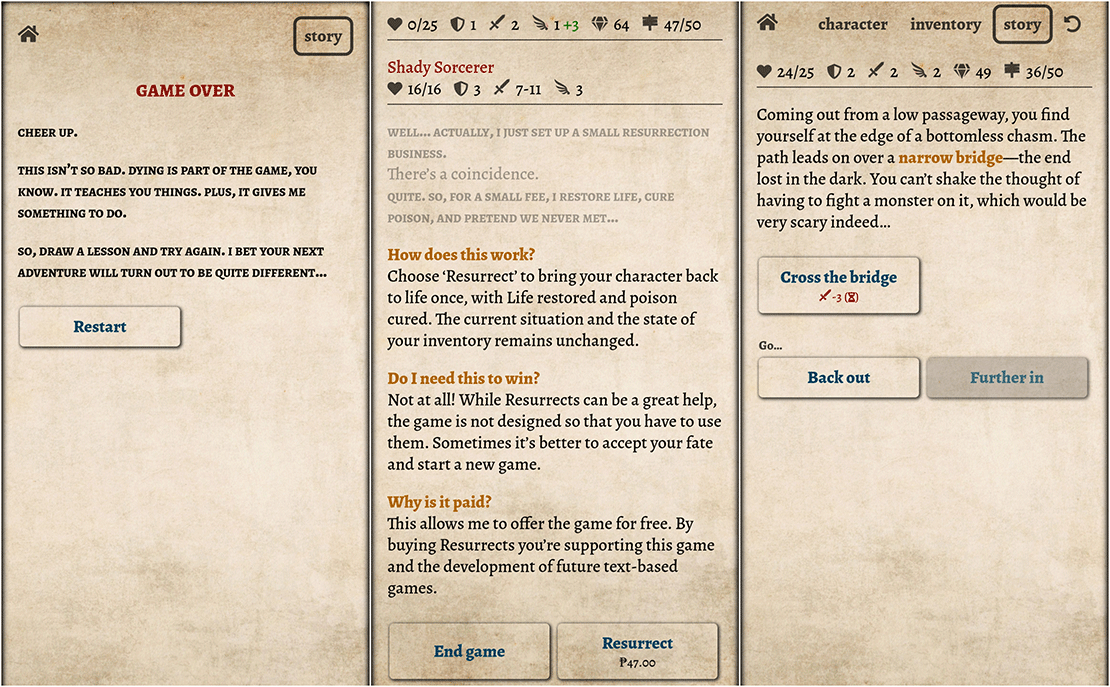 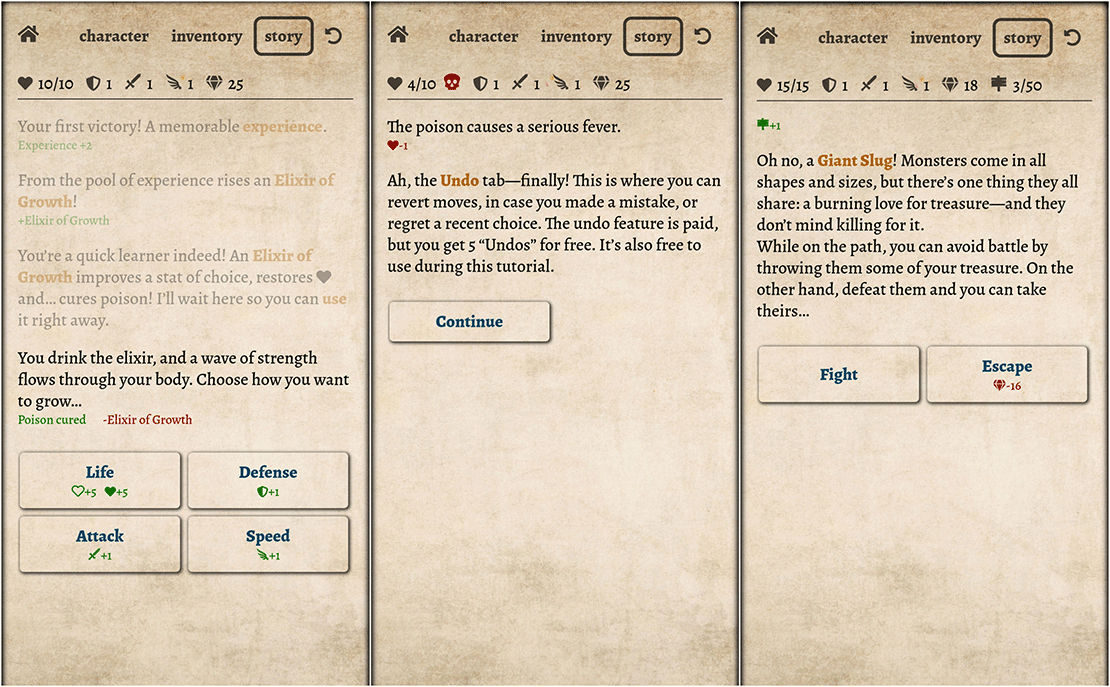 Just like any other text-based RPG, the game follows a simple set of mechanics. As soon as the game starts, just tap the New Game button to begin. Unlike the traditional RPG, Path of Adventure will not start with classic character creation. Instead, you will be playing the most basic role by default ~ Rouge. There are currently six characters in this game and each represents the level of difficulty (with Rouge being the easiest). In order to unlock the new character, you have to complete the path of the previous character. Although this might sounds easy and simple, Path Of Adventure is surprisingly difficult to master and you will be surprised how frustrating it can be just to complete an entire path.

Before you engage in a real adventure, you might have to take the tutorial first and learn the basics. Located above the screen is a navigation panel giving you access to Character information, Inventory, and Story. The Story tab is where most of the interaction will take place. Generally, the game will progress by giving you a series of situations and you just have to decide which option you would like to take until you have reached the end of the path and completed your journey. Located below the navigation panel is your character status showcasing your current attributes including your health, defense, attack rate, speed, gems, and path. It is very important to pay attention to your attributes to maximize your chances of surviving the game. Take note that once you get killed in this game, you have no other option but to start again back from the very beginning.

Path of Adventure is not programmed to conclude similarly in every attempt. In fact, each attempt takes you to a new path, a new adventure, and a new conclusion. This is a decision-making adventure and the fate of your character lies in your hands. Are you going to follow the straight path or would like to consider exploring other places in search of hidden treasures and gems? It is all up to you! What really matters is you survive and prevent your character from being killed at all cost. As you explore the game, you will have different encounters.

Weapons are your main tools to survive this game. It is important to equip yourself with the right weapon to make your character more efficient in every battle. Please be mindful that weapons are not permanent and you can only carry a limited number of items on your inventory. Weapons are obtained from various sources including Merchant’s shop, rewards from completed quests, or items looted from chests and hidden locations. If your inventory is full, you will have the option to drop other items. What is really more fascinating about weapons is how they can drastically change your attributes. Each weapon comes with special effects that will either help or harm you in the process.

A Cursed Weapon, for instance, weakens your stats until it is broken while an Enchanted weapon will boost your attributes as long as they are equipped. It is also important to check your weapon status to see if they are still durable enough for your next battle. From time to time, you will also acquire special items that you can use for different purposes. Some items can restore your life while others can cure you of poison. A special item called Elixir of Growth can perform both and it can also improve a stat of your choice. If you are lucky enough, you might be able to acquire special skills too which allows you to inflict bigger damage to your enemies.

Your main objective in this game is to complete your path no matter what actions you make in between. The only way to unlock a new character is to complete your journey. As mentioned above, there are six characters in this game and they will vary in terms of their level of difficulty. Each character also starts with a unique set of stats and gear. After completing the Rouge (Easy) level, you will soon unlock Warrior (Normal), Assassin (Quite Hard), Mage (Hard), Thief (Very Hard), and Ring-bearer (Ridiculous). Each character wears a different kind of ring and each ring comes with different effects.

Path of Adventure is completely free to play. You can download the game either from the Google Play Store or the Apple App Store. However, the game still comes with notable in-app purchases but are totally optional. The microtransaction in this game can be found when purchasing Undo's and Resurrections. Undo, as what the term connotes, allows you to undo your previous action. This can be very useful when you open cursed chests or obtained cursed weapons. Resurrection, on the other hand, allows you to continue with the game and start from where to left off.

Path of Adventure is a one-satisfying text-based adventure game that will not just bring a nostalgic experience but also delivers the right amount of challenge that makes it absolutely worth exploring. This game might be notably characterized by its overall simplicity but the unpredictability of its gameplay has become its greatest strength. Not to mention the wonderfully crafted storyline that changes dynamically for every attempt.

The decision-making feature of the game and its unpredictable results provide Path of Adventure an impressive replay value. Despite missing some multiplayer elements and some exciting campaigns, Path of Adventure is definitely something you can confidently include on top of your mobile game list. Just make sure that you have enough patience and you know how to manage your temper because this game can become frustratingly challenging. Good luck and have fun!