Embark yourself in another epic text-based adventure with Paladins. Much like how fantasy is normally depicted in novels and role-playing adventure games, Paladins features all the mystical and dreamy elements. The game allows you to explore a world inhabited by humans, wolves, orcs, elves, and many other magical creatures that are far beyond our imagination. With its impressive plot, unpredictable turn of events, amazing character development, and commendable longevity, Delight Games’ Paladins is a text-based game that is seemingly made to perfection. Not to be confused with Hi-Rez Studios’ game of the same name, Delight Games’ Paladins is a full-fledged text-based adventure that is aimed to stretch out the best of your creative imagination and also to measure your decision-making skills.

Paladins is a simple yet surprisingly addictive text-based game. It wonderfully managed to capture all the classic text-based game elements that most of us grew up with while successfully incorporating some modern formula to it. While the text-based game genre may no longer at its peak considering that we are being fed to a plethora of visually stunning role-playing video games for consoles and various gaming platforms, the genre is slowly finding its way back. Thanks to dedicated independent game developers who exerted their effort to bring us back this nostalgic gaming experience.

It should be noted that Paladins is a pure text-based adventure. Unlike visual novels and otome games (story-based simulation) that are mostly presented with remarkable graphics and intricate details, Paladins is merely non-graphical. The game might feature some illustrations from time to time but the entirety of it is text-based. Much like other games that fall into the same category, Paladins is a decision-making game where the fate of your character depends on the choices you make. In the entire course of the game, you will be given different situations with different possible actions to choose from. Each action will affect the attributes of your character which will either help or harm you in the process.

What really separates Paladins from other text-based games today is not just the well-written story but also the fact that you are playing different roles for different chapters. This requires you to establish a different perspective for different characters allowing you to play well with your creative imagination. 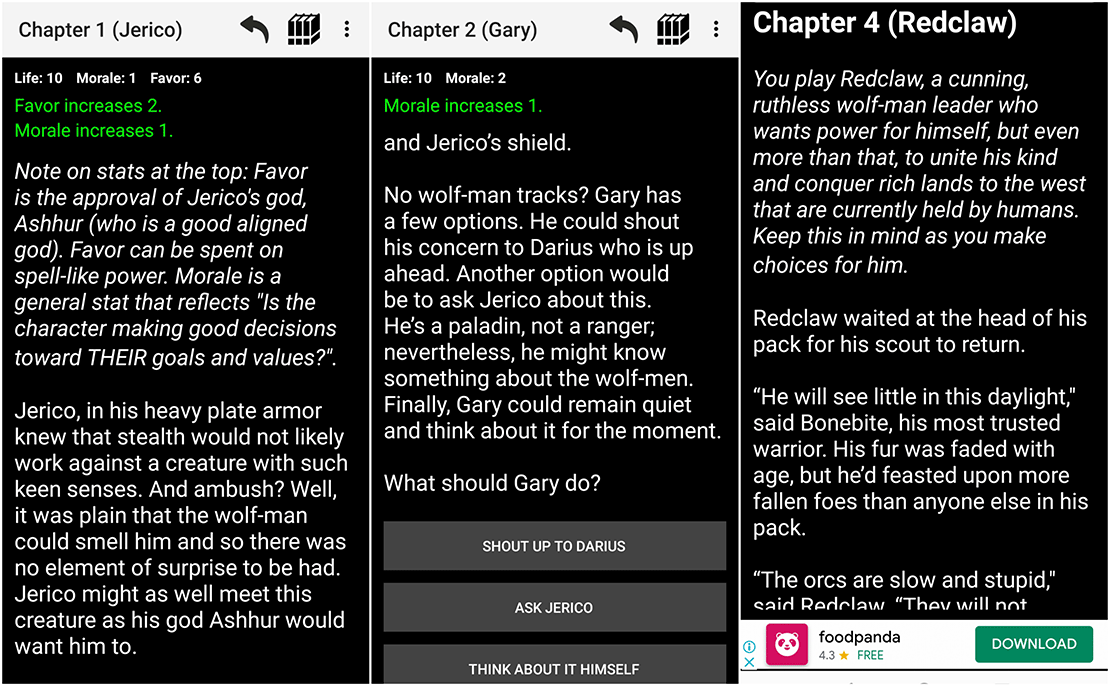 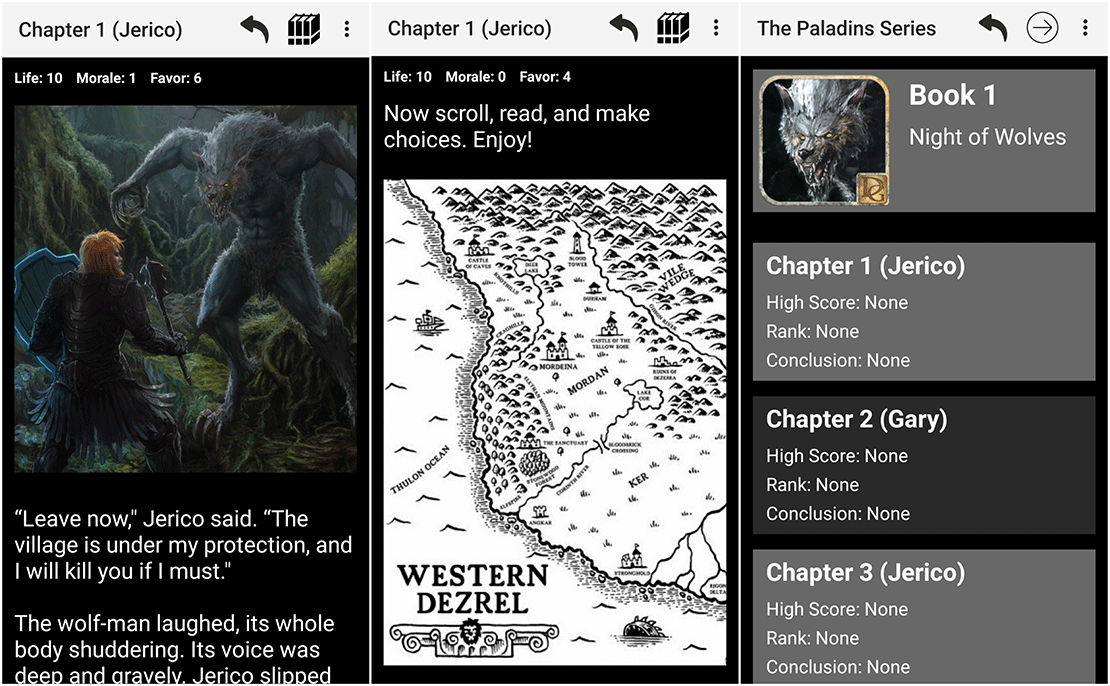 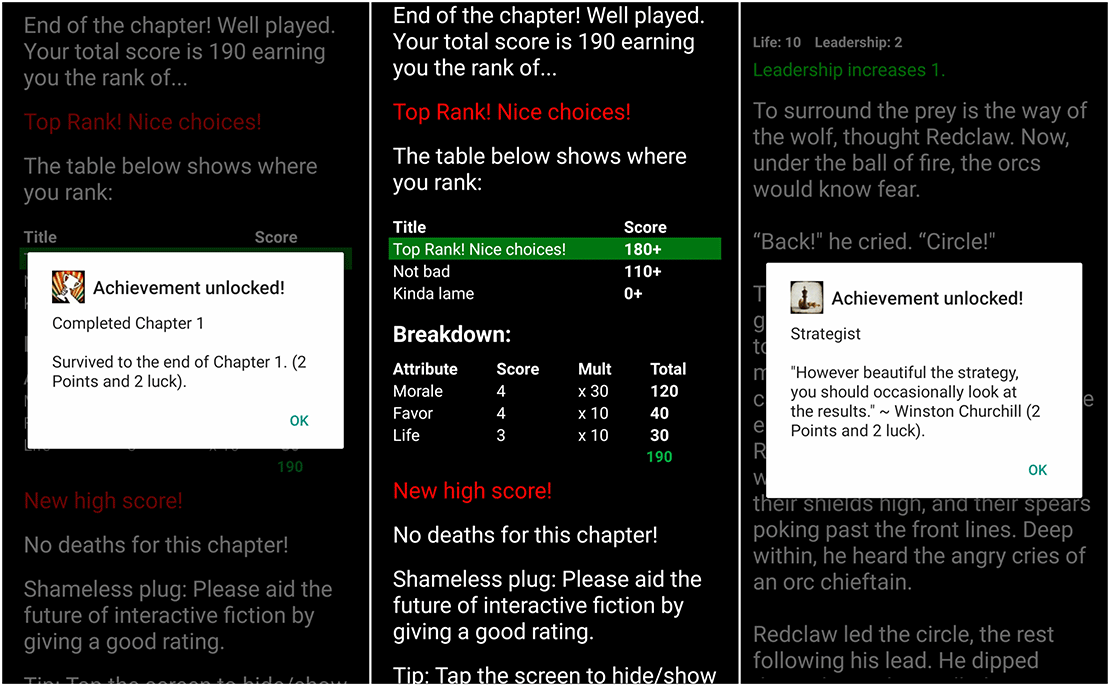 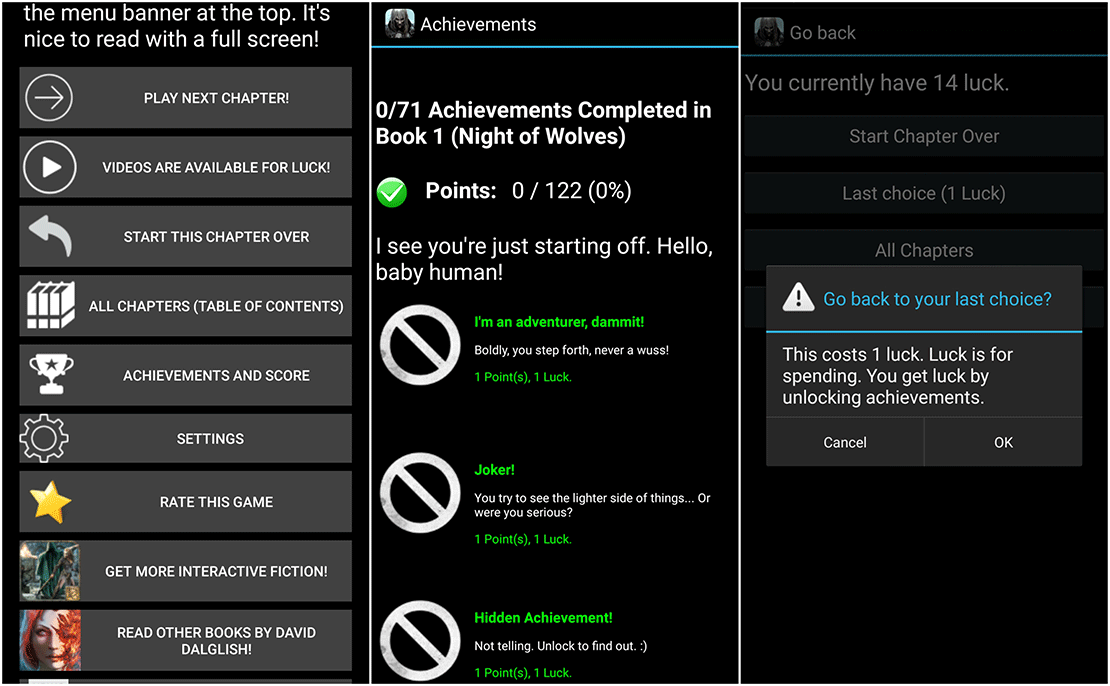 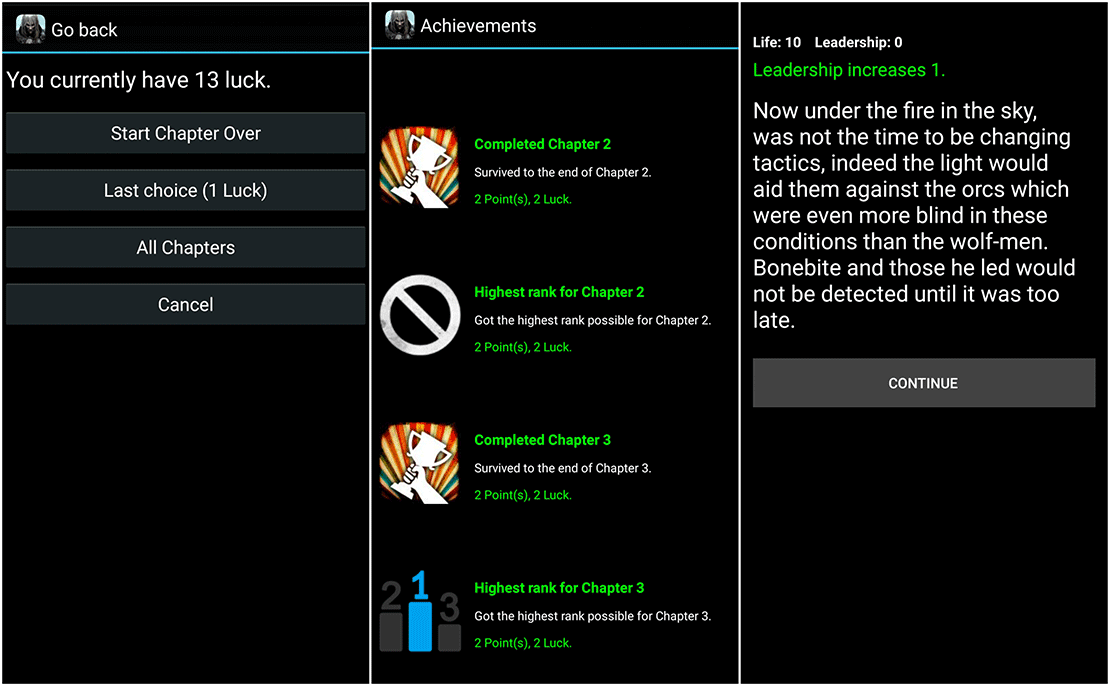 As a full-fledged text-based adventure, Paladins will not require intense action. The mechanics are generally simple and easily manageable but the players are still encouraged to pay attention to every single detail in every given scenario. Unlike other RPGs where you can easily skip those lengthy NPC conversations, this game encourages you to read, read, and most of all, read! In fact, you will most likely spend most of your time in this game reading than interacting. It is interesting to note that Paladins is based on an actual novel and the game is divided into different chapters. Each chapter features a different character and each possesses different attributes.

The main character for this game is Jericho, a paladin who follows the god Ashhur (a god of protection, compassion, courage, and honor). Your goal is to help Jericho solve all his dilemmas and to prove his worth as a faithful follower of Ashhur. As you progress, you will encounter various situations where he might question his faith, his loyalty, and his courage. The best part about the game is that you are not going to play a single character all through the entire book. Each chapter features different recurring characters and each comes with a different backstory to explore. Located above the screen are the attributes that you must pay attention to. All your choices will not just affect their progress but will also make an impact on your personal score and rank.

"Paladins" comes with an Achievement system that allows you to earn points and luck. Luck plays a crucial role in this game. In order to open the next chapter, you have to pay a certain amount of Luck points. These luck points can be obtained in numerous ways. You can get them by completing each chapter, unlocking a certain achievement, or by watching a rewarded video.

A Novel turned to Game

One great thing that you will instantly notice about Paladins is the well-written storyline. Unlike other story-based games, Paladins’ plot is notably unique, non-formulaic, and definitely well-constructed. The choice of words applied in this game is not shallow but deep. This is not really surprising because Paladins is actually based on a real published novel. The story of Paladins is set in the magical world of Dezrel created by the epic fantasy fiction author David Dalglish. It was an official partnership between Dalglish and Delight Games to turn his novel into an interactive text-based adventure. Delight Games managed to transform Dalglish’s work into an interactive and playable masterpiece.

The story itself is Paladins’ greatest strength. It really feels like you are reading an actual fantasy novel but in an interactive manner. In this game, you are putting yourself into the shoes of all the characters and watch the story unfold. Each character comes with a different journey to follow, a different mystery to unveil, and a different backstory to explore. The game also features impressive character development. The longer you progress, the more rewarding the experience will become as you witness your character transform and evolve. Still, this is a decision-making game so make sure that you are making the right choices. Otherwise, you might end up failing or worse, dying. If you failed, get killed, or are simply not satisfied with your previous action, you can always undo your last choice. Just tap the Back/Undo icon on the upper panel of the screen and select the Last Choice. This will cost you 1 Luck though.

What separates Paladins from a typical text-based adventure is the multiple roles you are going to explore. Currently, the game has 103 chapters to explore and every chapter comes with a different adventure and a different character to play (some of which might reoccur). The first chapter of Book 1 (Night of Wolves), for example, follows Jerico and his bloody battle against a wolf-man as part of his mission to protect the small village of Durham. Interestingly, the focus of the story will eventually switch to the coward and scrappy farmer named Gary in Chapter 2 before it turns back to Jerico in the next chapter. The fourth chapter, on the other hand, will introduce us to Redclaw, the cunning and ruthless leader of the wolves which gives us the villain perspective in the story.

Each character comes with different attributes. For Jerico, the attributes include Life, Morale, and Favor. Favor is a unique attribute for his character which can be obtained when his god Ashhur approves his action. The “favor” can be spent on spell-like power which you can use efficiently when engaging in battles. For Gary (and other normal people), the attributes include Life and Morale. “Morale” is a general stat or attribute that determines if the character is making the right decisions. For a villain like Redclaw, the unique attribute is Leadership. It determines if he is making the right decision as the leader of his pack.

The Achievement system in this game is an interesting addition. Completing an achievement allows you to earn points and luck in return. By tapping the three-dots icon in the upper left corner of the screen, you can access the Achievement Board by selecting the “Achievements and Score” option. Here, it lists down all the achievements to unlock and scores to earn. Although some achievements are very self-explanatory, the game doesn’t provide clear instruction or details on how to achieve them. Interestingly, the game also has a Score system. Each chapter will be scored based on your overall performance. Your attributes will greatly affect your final score.

You will get your rank based on your final score. Generally, there are three rank titles in the game; Top Rank, Not Bad, and Kinda Lame. The number of deaths will also play a huge impact on your score and ranking so try to prevent your character from being killed at all costs. Luck, on the other hand, is a very important element in Paladins. It is your only key to access the next chapter. Most of the time, the game requires 7 Luck points to unlock the new chapter so you really have to find ways to earn them. The quickest way is to watch a rewarded video which will guarantee you to earn 1 Luck point. If it doesn’t bother you to watch 20-30-second-long ads, then you should consider this option and use it to your advantage.

Interestingly, you can enjoy this game even without purchasing anything but it might take you some time to unlock the next chapters especially if you already run out of luck points. Apparently, the game doesn’t offer a generous reward system. You only earn 1 luck point for each rewarded video (limited), 1 or 2 luck points for each completed chapter, and 1 luck point for each completed achievement. If you do not mind watching lengthy ads, you can take advantage of the rewarded videos offered in this game. They are either being offered every time you open the app or you can access them from the in-game store (Get Luck and Stuff section of the Menu).
If you want to progress quickly, you might consider purchasing items from their store. You can purchase instant 7 Luck for $0.99 or better yet buy their Premium Upgrade that allows you to unlock all of the 4 Paladins Gamebooks with no ads. There is also a Premium offer that allows you to unlock all the Delight Games Gamebooks (including their Choices games like Demon, Wizard, Rogue, Witch, and more).

Paladins is a perfect example of a satisfying text-based adventure. Whether you are a big fan of David Dalglish’s works or you are just fascinated with epic fantasy fiction, Delight Games’ Paladins gave enough justice to this particular genre. It was well executed allowing Delight Games to literally transform Dalglish’s novel into a fun and interactive “gamebook”. The concept of exploring different characters in different chapters is an interesting formula that makes Paladins more distinctive from other text-based adventure games.

The 103 chapters to explore (covering all the four books of The Paladins series) provides the game impressive longevity. Not to mention the option to repeat an entire chapter that provides Paladins a remarkable replay value (allowing players to explore different endings based on different decisions). Overall, if you are looking for a text-based adventure that will test the best of your creative imagination, feel free to explore the magical world of Dezrel through Delight Game’s Paladins and let your epic journey begins! Have fun!