Enter another epic battle and prove that you really have what it takes to become the most powerful mage in the world! Magium is another full-fledged text-based adventure that takes you to a magical journey of an aspiring mage who entered a life-risking tournament. Now, he has to fight for his survival while hoping to possibly obtain the tournament’s precious reward ~ the Magium. They said that it is the source of all the magic and the only thing that could possibly turn him into a real mage. Magium is not different from a standard text-based adventure. It comes with the same classic formula but delivers a unique approach, especially when it comes to how the story is being narrated and how the players interact. If you are up for a unique text-based adventure, feel free to explore Magium and see what else this game has to offer.

If you grew up enjoying reading and playing those old-school Choose Your Own Adventure gamebooks, then you will surely find Magium game absolutely nostalgic. Generally, like most text-based adventure, the fate of your character in this game will depend on your decisions. Like the old-school CYOA (Choose Your Own Adventure), Magium is being narrated in a second-person perspective. You will put yourself in the character named Barry, a human who aspires to become a full-fledged mage. Since humans are not capable of using magic, Barry made extensive research on how to become a mage. This led him to discover the power of Magium and how it can possibly turn him into a powerful mage.

However, Magium cannot be obtained easily. The only way to get this is to win a deadly tournament in a place called Varathia. In this tournament, all the powerful mages will gather and compete with each other to earn the title of becoming the most powerful mage. Determined to reach his goal, Barry courageously entered the tournament without knowing how dangerous it could be. Interestingly, as the story progresses, you will encounter several people who will accompany you in your mission. To top it all, you can also take advantage of your so-called Stat Device and use it for your own survival. Story-wise, Magium managed to merge some classic Dungeons and Dragon elements with a pinch of Hunger Games vibes to it. If you think you can survive this challenge, join Barry as he enters the Mage tournament and let your epic mission begins. 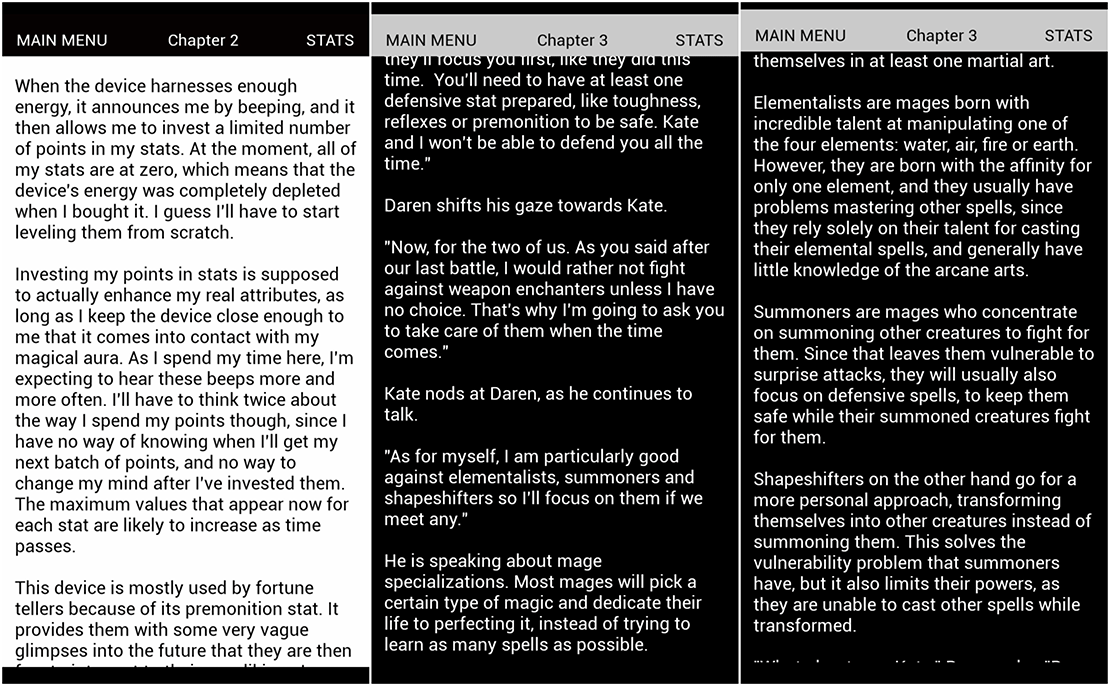 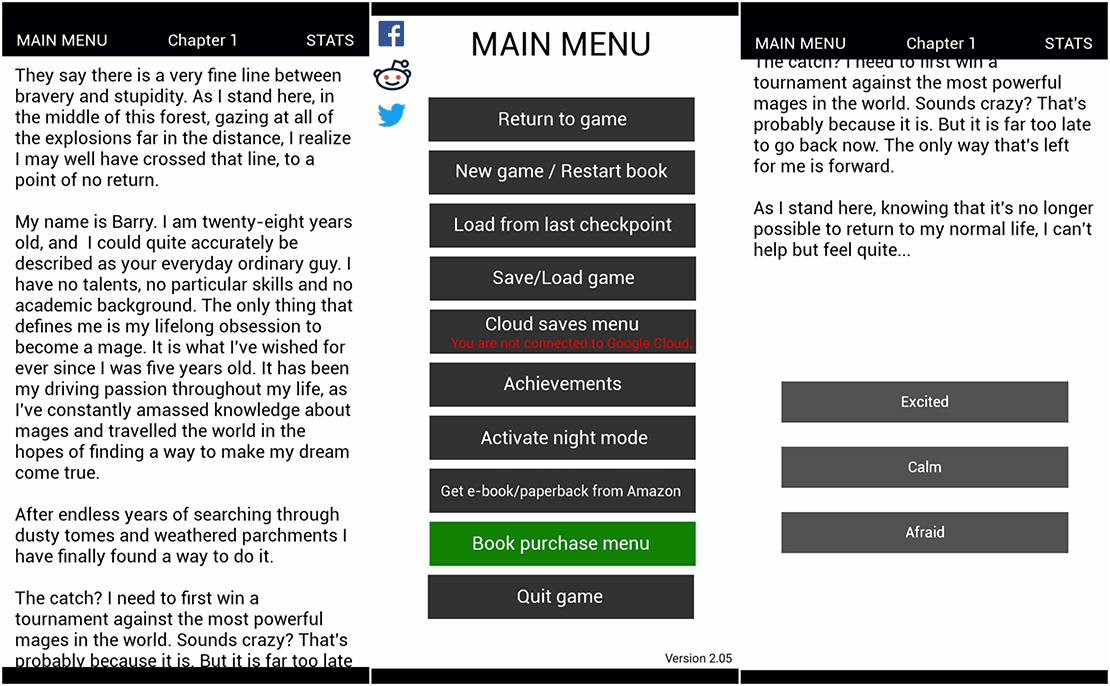 The mechanics are generally simple and easily manageable. As a full-fledged text-based adventure, Magium doesn’t require too much interaction. Take note that this is not a skill-based game that takes you to an action-packed combat system. Generally, the game is more like reading an interactive novel. Understanding the story and analyzing the situation you were in is very important to maximize your chances of surviving this game. In every situation, you will be given a set of options to choose from. Tap your choice to progress. Be mindful that every decision you make will affect the entire story. Some of which might lead you to a successful path while others might put you in danger or worse, death!

If the character gets killed, you have options to either start the whole chapter or load the game to the recent checkpoint. Apparently, the game doesn’t have an “Undo” option and there is also no currency system to pay for such action either. Magium is divided into several books and each book comes in several chapters. The succeeding books can be unlocked by completing a certain number of achievements or you can unlock them instantly by paying. This is where the microtransaction comes in. It is interesting to note that Magium is merely ads-free so expect no or lesser interruptions while playing.

Your character in this game is a normal human who bravely enters a deadly tournament where powerful mages compete against each other.  It is important that you make wise decisions to maximize your chances of survival, otherwise, you might end up dying. You will meet different mages along the way and some of which will accompany you on your journey. There’s Daren, a healer mage who offers his service to protect you until the very end. You will also meet Kate, a female Elementalist that despite being accused as a banshee will prove herself as a trustworthy companion. As you and your companions wander around the magical island of Varathia, you will also encounter greedy and merciless mages who are ready to kill.

Will you engage in combat right away? Is it practical to hide and run away? Are you strong enough to fight? These are just a few of the things you must consider before making your final decision. You cannot even tell if you are on an ambush or if you are dealing with the right person. It is important to determine which among your companions should be trusted. Be careful of who are you sharing your secrets with because it might also harm you in the future. Trust your instinct and make sure to analyze each situation carefully. Your decision-making skills will also be applied when distributing attributes to your stat device. Each attribute will make a huge impact on your journey so make sure which one to focus on.

Barry may not possess any natural magic skills as most mages do but he is equipped with a so-called Stat device. I just love how the game managed to incorporate the stat system and make it part of its well-crafted story. The role of the Stat device is very much the same as the classic RPG stat system. As you progress, you will earn stat points which can be distributed to your character’s attributes. These attributes include Strength, Speed, Toughness, Reflexes, Hearing, Observation, Ancient Languages, Combat Technique, and Premonition. Every once in a while, the game will check if your stats are high enough to perform a certain action in a scene. If your stat level is not high enough, you will fail the stat check and it will be marked with red texts. A successful stat check, on the other hand, will be shown in green.

Each attribute comes with different advantages. If you give enough points in attributes like Strength, Speed, Toughness, and Reflexes, you might have a great chance of surviving combat and ambush attacks. Attributes like Hearing and Observation, on the other hand, might give you a heads up or warning of the possible danger that you might encounter ahead. Unlike the traditional RPG stat system, however, points in this game are not obtained when earning enough experience or reaching a certain level. They will not arrive regularly so when the opportunity comes in, make sure you distribute them on proper attributes because as soon you confirm, there is no way to change them (unless you get killed without reaching the next checkpoint).

The fate of your character indeed depends on your decisions. However, there is a notable downfall for Magium. The result can be controlled. If the character gets killed in a battle or any circumstances, you have the option to restart the entire book or load from the last checkpoint. You can also create your own save point. So, whenever you start the game from the last checkpoint, you are given the same situation and the same options to choose from. Therefore, the player can establish a formula or a path by simply choosing the same answers and changing the last decision that brought him into danger. Since there are no consequences and you do not have to pay any form of virtual currency to restart the game from where you left off, it somehow affects the game’s overall replay value.

If you wish to unlock the second book right away, you can also purchase it from the app. You can also get an eBook or paperback copy of Chris Michael Wilson’s Magium from Amazon.

If you love reading fantasy novels or if you grew up enjoying Choose Your Own Adventure Books, or playing the classic Dungeons & Dragons game, Magium is a game perfectly tailored to match your creative taste. The game features a well-crafted storyline that takes you to a magical world of mages that will put the best of your creative imagination to a test. Another interesting highlight of Magium is the diversity of characters to explore. Here, you will encounter different mages with different personalities and they will accompany you along the way. It is all up to you if you will trust them or not! Just make sure that you are making a wise decision to survive this epic battle for survival.

While the game managed to capture all the classic RPG elements that we all love, Magium still delivers some unique approaches that make it distinctive from other text-based adventures. These approaches include how the game impressively incorporated the stat system by introducing the stat device in the story. It is also interesting to note that the first book of Magium alone offers an astounding number of more or less 178k words that can be translated to about 700 book pages. This provides Magium a commendable longevity. Interestingly, the novel series itself is still in progress and so is the game. So, if you want to catch up, you still have lots of time to do so. Feel free to explore Magium and see what kind of adventure awaits you.