What will you do if you suddenly get a message from an unknown person telling you that she is in the middle of a terrible outbreak? What if her fate will greatly depend on you? Will you help her survive or will you ignore her and leave her to death? Anybody Out There: Dead City or simply Dead City is an interactive fiction game created by Everybyte, the same team behind Duskwood. In this game, you will be taken into a post-apocalyptic scenario, a zombie-like outbreak that occurred in an unnamed location. Interestingly, instead of you playing the main character, your role in this game is to support a survivor named Sam who is in the actual place of the outbreak. The goal is pretty clear, you have to help Sam survive and prevent here either from being killed or being infected by the so-called “dead”. If you are up for a thrilling horror-survival experience, feel free to explore Dead City and let your nightmarish journey begins.

AOT: Dead City is considered as a text-based adventure, an interactive fiction similar to those mobile “choose your own adventure” games where your choices affect the entire fate of your character, or for this game ~ Sam. Interestingly, what really separates Dead City from other text-based adventure games is its realistic approach. The entire flow of the game is just like having a chat conversation with someone over your phone. If you have experienced playing those interactive chat stories, Dead City works the same way. However, instead of taking you on a romantic journey, this game brings you to a terrifying horror survival tale and it all started after you received an unexpected message from a girl named Sam.

Generally, Dead City follows the story of Sam and her journey to survive a mysterious outbreak that turns people into a zombie (referred in this game as “dead”). Luckily, she discovered a phone with your number on it and contacted you immediately hoping to get a response. You later discovered that Sam is trapped in a walled area and your place is not part of the infected zone.  In the entire course of the game, Sam will constantly update you on what’s happening as she faces different struggles along the way. Sam will also ask you critical questions from time to time and whatever your decision is, will affect her journey. Will you be able to help her survive this horrifying catastrophe? 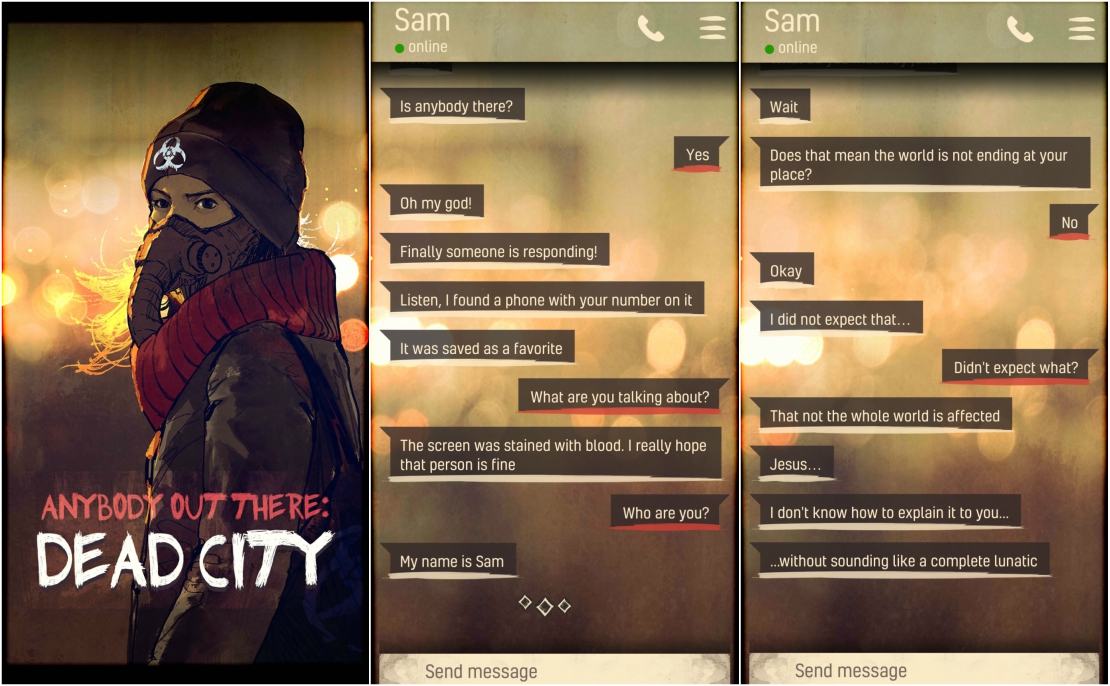 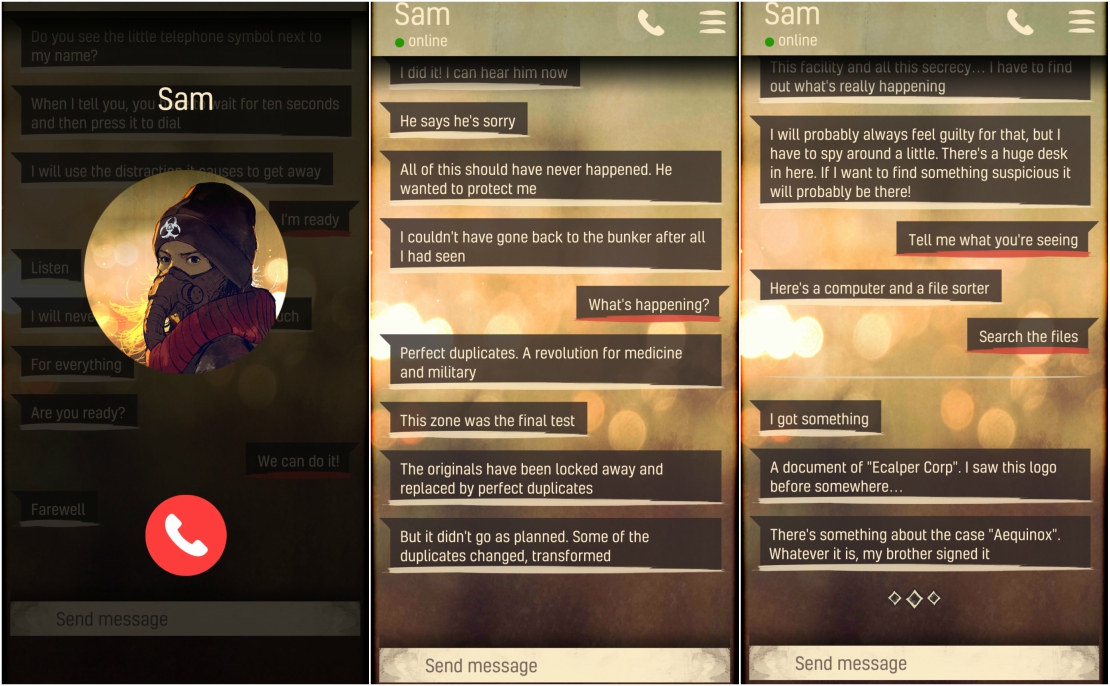 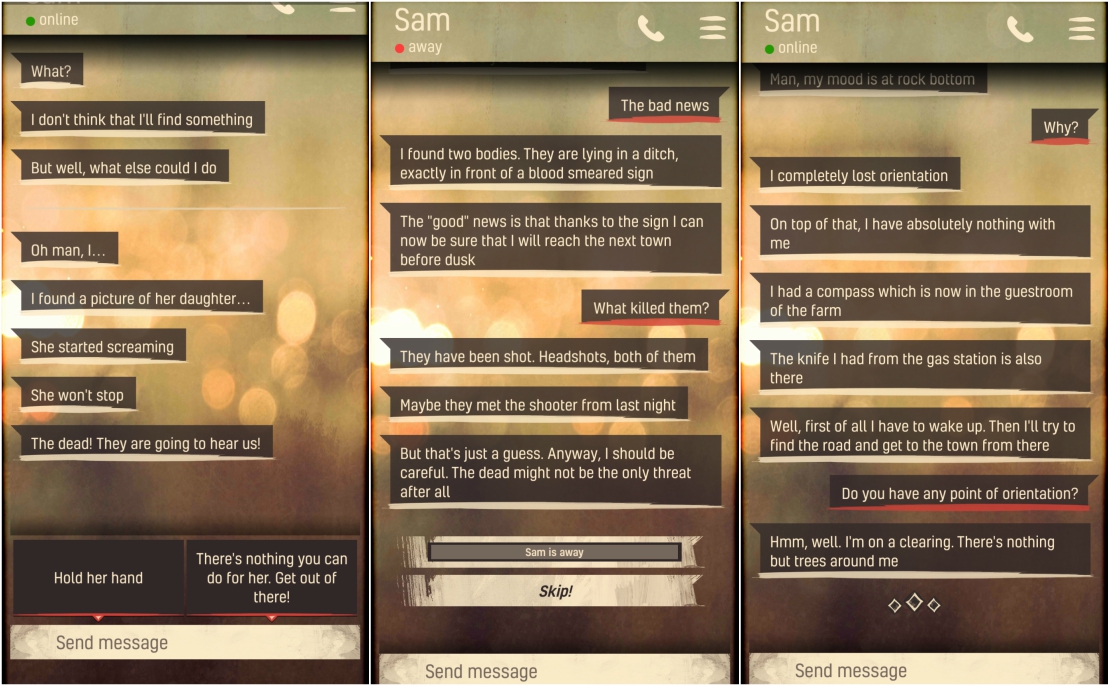 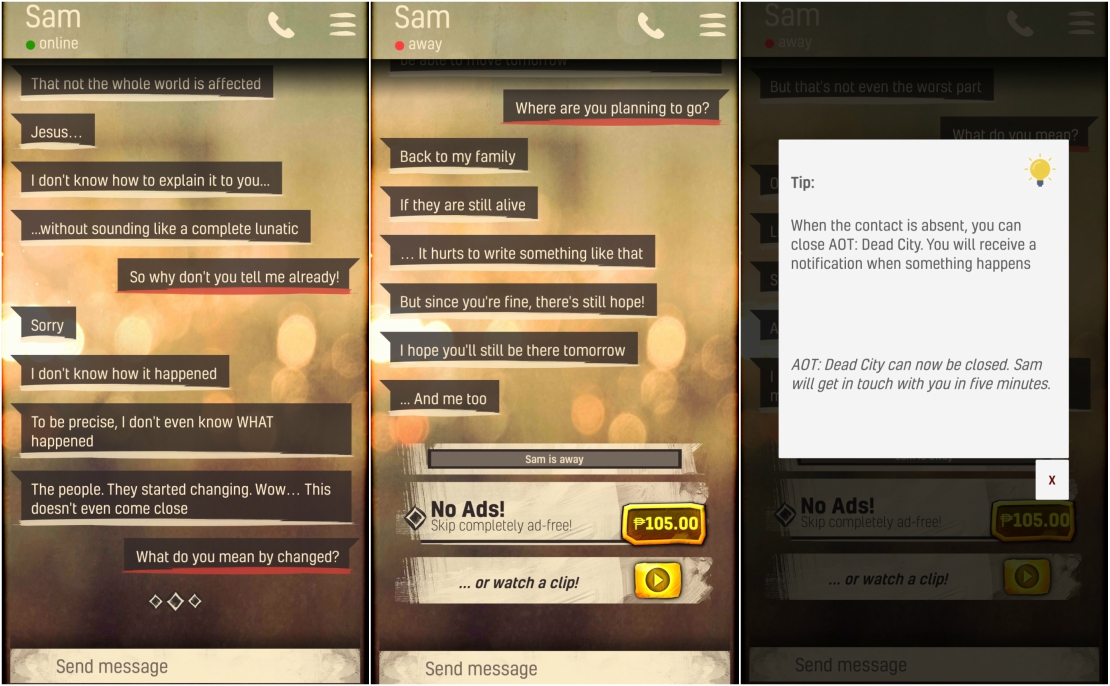 The mechanics for Dead City are generally simple and easily manageable. Unlike the typical text-based adventure games, Dead City is not presented on a chapter by chapter basis. It comes with a conversational style narrative and it feels like you are just having a chat with someone else over the phone. Another noteworthy feature of this game is the real-time responses. If Sam responded and tells you that she will update you after an hour, you literally have to wait for an hour before you get a new response. It means that you can close the app and just wait for the next notification.

If you are patient enough to wait, the day 1 in Dead City will literally take 24 hours to complete. However, the game will give you options to expedite the process. By watching rewarded videos, you can skip the waiting and proceed to the next scene. Since the entire game will only last till Day 4, you can easily finish Dead City in one sitting with the help of the rewarded videos. Like most CYOA games, Dead City comes with different endings depending on the choices you make. At some point in this game, you have to decide whether it is practical to run away or pull the trigger of your gun to survive.

Advertisements are very common in every mobile game. It is understandable that developers get most of the revenue from these ads. However, the placement of these ads will affect not just the overall quality but also the entire gaming experience. Some games feature ads that are improperly placed and somehow interrupts you while playing. For Dead City, however, the ads are cleverly inputted. There is a small banner below the screen that doesn’t affect the gameplay. There will be no interruptions but you can always take advantage of the rewarded videos to skip the waiting. Watching the rewarded videos is optional but undeniably tempting.

If you are not willing to wait for more than 3 hours just to get a new response from Sam, you can always watch a reward video and skip everything. That is if you do not mind watching 15 to 30-second-long ads. You may also encounter events that can be skipped right away even without watching any reward videos. If you really want to eliminate the ads, you might also consider buying its ad-free version for a minimal one-time fee.

Above anything else, what really makes Dead City more fascinating is the story itself. The game features a well-crafted storyline that wonderfully captures the right intensity and drama that makes you emotionally-invested in all the characters involved. To top it all, the execution of each scene and how detailed they are being delivered provides a highly realistic experience and makes you feel that you are actually talking to another person over the line. Aside from Sam, you will also encounter other interesting characters like Ace, the creepy little girl from an abandoned house, Sam’s brother Corey, and many more. As you progress, you will start to unfold some of the mysteries behind this horrifying catastrophe but will also leave you with too many questions.

Why is the outbreak limited to certain areas and why are you not affected by it? What are the fences and why most towns are being walled? When did the outbreak started and why only a few people were forced to enter the bunkers? Is the military behind it? These are just a few of the questions that you might encounter as you explore this game. Despite the incredible story, Dead City is relatively short compared to other text-based adventures. If you skip all the waiting, you can finish the entire journey in less than a day. Some might find this game emotionally manipulative because just in time that you are starting to invest yourself in some of its characters, the game will treat you with an inconclusive ending.

Whatever your choices are, the game is programmed to end on Day 4. Whether the result of your choices is good or bad, the game will always end inconclusively. Meaning, there is no firm conclusion to it, an open ending that will leave you with many unanswered questions. It will make you wonder if Sam will ever survive on her own after your last conversation with her. Despite the unfulfilling ending, it is interesting to note that the game is still in progress. The chance of getting an updated version or getting a possible sequel is relatively high. There are just too many areas to explore in this game and it leaves you wanting more.

If you are hungry for some intense horror survival experience, Dead City will surely not disappoint. The approach might be different compared to those action-packed and gruesome horror survival video games but it will surely test the best of your creative imagination. Despite the apparent simplicity of its gameplay, Dead City managed to capture the same eerie experience by incorporating the right amount of intensity, horror, and drama. The chat-like conversation will remind you of games like Lifeline and those interactive chat stories developed by Telltale. It provides you a realistic experience and makes you feel that you are actually having a conversation with someone over the phone.

Appearance-wise, despite being a full-fledged text-based adventure, Dead City still features a well-fitting theme and accompanied by a piece of eerie music to set the horror-survival mood to it.  The game may not offer commendable longevity and a decent replay value but the entire thrilling experience you can earn from this text-based adventure makes it absolutely worth exploring. If you think you can help Sam survive this horrifying outbreak, feel free to explore AOT: Dead City and see how far you can go. Good luck!